This is a prototype. YMMV

mazzle is a command line tool to coordinate large complicated environments that are built from multiple devops tools. mazzle is kind of a task runner and its web GUI is modelled to appear like a pipelined continuous integration server.

See this project on Github

infrastructure as code and pipelines as code

Write self-descriptive pipelines in dot syntax renderable by graphviz and executable by this tool. mazzle uses Graphviz dot file syntax for its configuration. In mazzle, you specify the order and dependencies of pipeline execution via flow of data between components. Data passes between components via environment variables.

mazzle knows what parts of your environment infrastructure can run together concurrently and in parallel due to its configuration being a graph file. Here is an example graph and GUI screenshot. 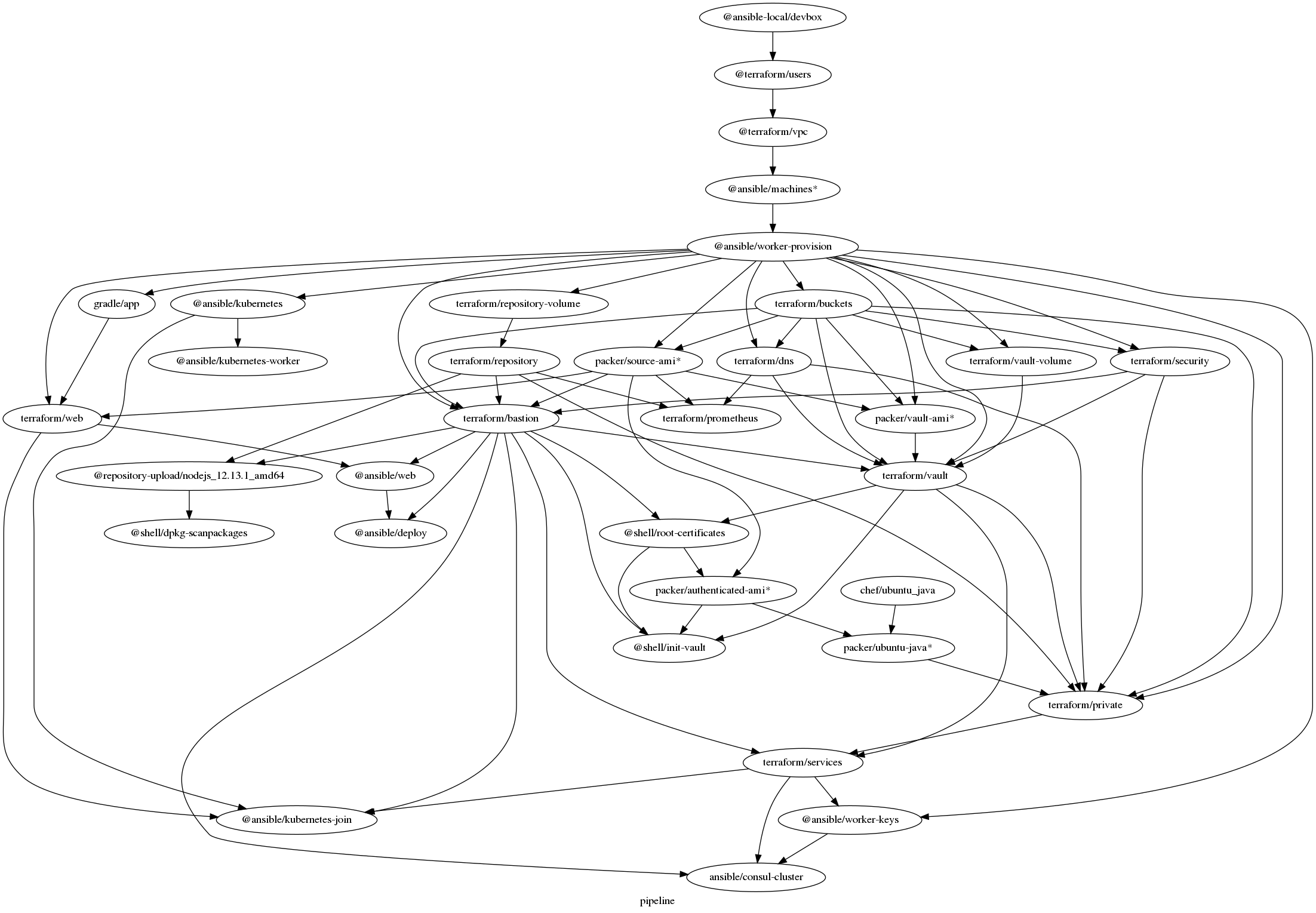 This pipeline is fairly complicated environment that brings up two worker nodes with Ansible and provisions Hashicorp Vault with Terraform. Notice how some components such as dns, security, vault volume can all begin running at the same time as they are independent. 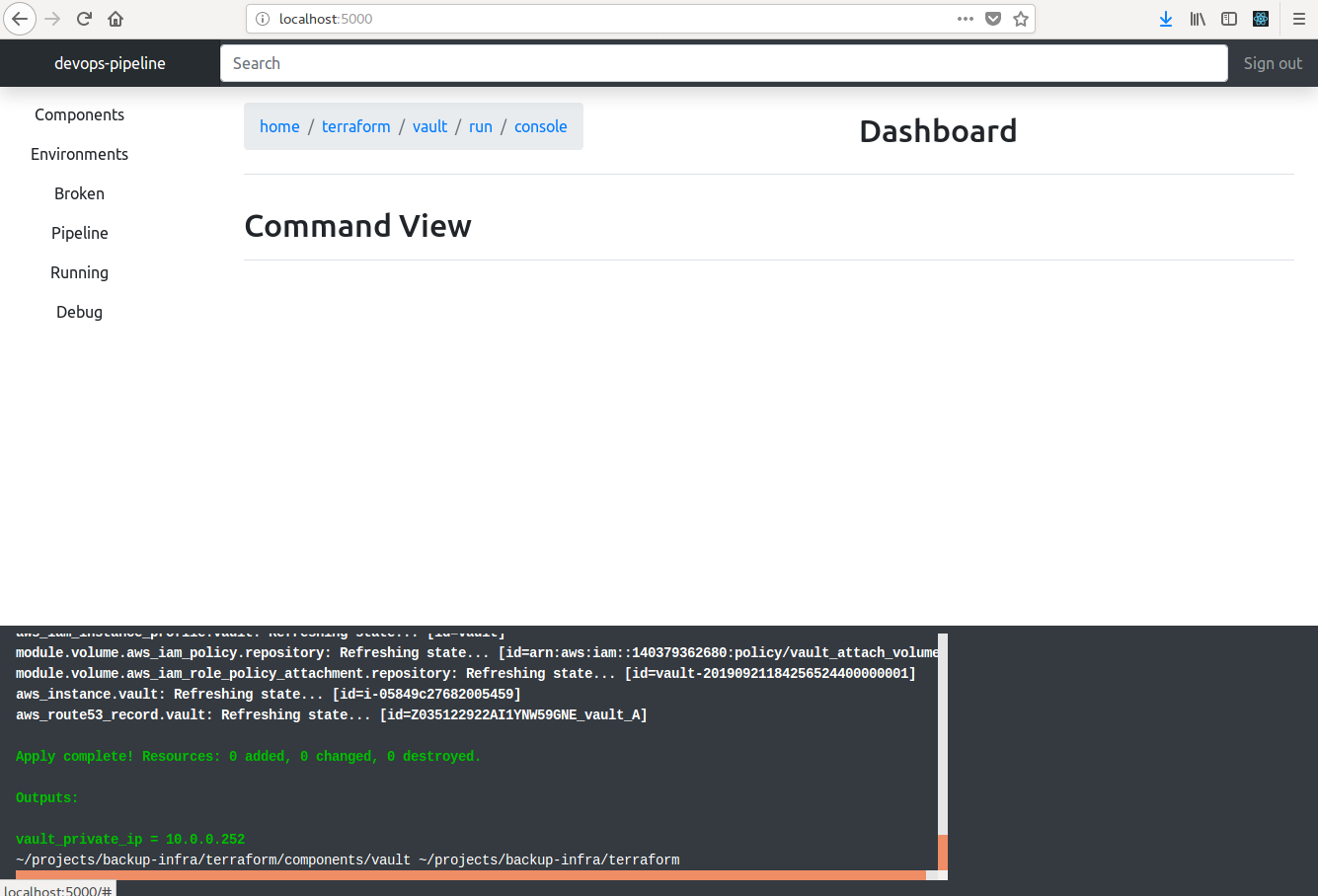 devops-pipeline understands .dot files and interprets them to work out what must be done. All devops-pipeline does is walk the directories mentioned by your dot file and run a script inside each folder, named after the lifecycle stage. This is where you define what should happen for that stage of the pipeline. This is what gives devops-pipeline the flexibility to run any devops tool.

Your code is separated by directory by each tool. Like a monorepository, you divide your code by tool, so you have a directory for ansible code, a directory for terraform code. Devops-pipeline loops through these directories and runs a lifecycle command that you have in each code directory.

For example, you have the following code directories:

Devops-pipeline will cd to these directories and run a lifecycle command, which could be any of the following items in bold:

idiom - provision SSH workers at the beginning of your pipeline

Unlike Jenkins and gocd, worker nodes are considered to be part of your pipeline. An idiom in devops-pipeline is that your early stages in your pipeline is provisioning worker nodes. These worker nodes run the remainder of the build. You can replace --workers with --discover-workers-from-output <output name> where output name is the name of an ouput from your machine provisioning component that contains a list of server hostnames or IP addresses that you can SSH onto.

Here is an example of ansible provisioning EC2 instances and installing dependencies on worker nodes, then running packer to build an AMI and launching that AMI with terraform.

The at symbol @ at the beginning of a component reference means that this component builds on the master node.

Example - building and using an AMI

Go to http://localhost:5000. Click switch to environment under home.

If you’re provisioning worker nodes as part of your pipeline, which is what we recommend, you can output the machine hostnames as an output and use --discover-workers-from-output output-name.

passing data along a pipeline

Each life cycle command shell script is called with the environment variables:

Youre lifecycle script must take this environment variables and write to files at their locations. The OUTPUT_PATH is an absolute path to a file that you should write outputs as a JSON file. The EXIT_CODE_PATH is where you should write an exit code of the lifecycle command. If it is 0 then the build is considered to be successful.

ARTIFACT_PATH is a path that you should save an archive of parts of your working directory to be required from another pipeline.

Each time devops-pipeline runs a pipeline, it passes outputs of all upstream variables to to your pipeline command as environment variables. 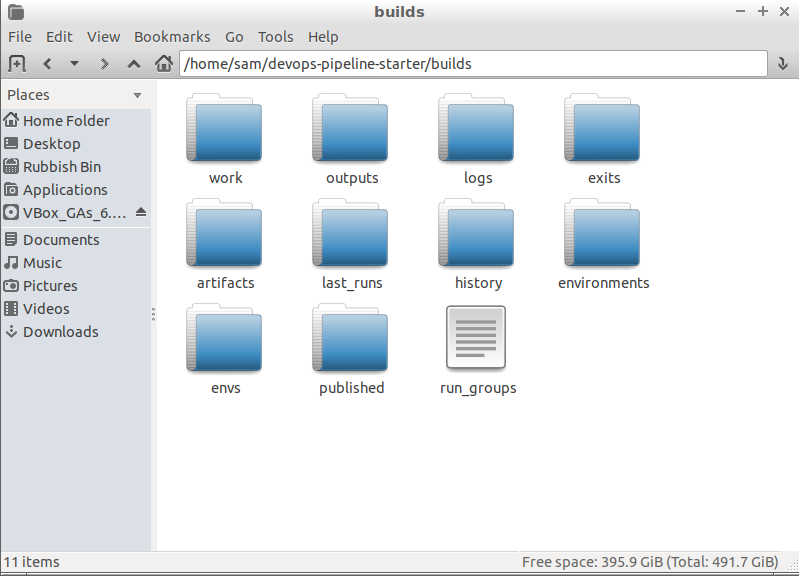 The builds directory is where logs and other outputs go:

To depend on an artifact, such as an archived workspace from a previous build (see ARTIFACT_PATH above) create a file called require in your root of a provider directory. It should contain the name of the pipeline to pull artifacts from and the words latest or latestSuccessful. Latest means the last created artifact and latestSuccessful means the last artifact that was a succeeding build.

For example, the following pulls in gradle/app